Trick or treat! It’s Halloween. To get you in the mood for horror movies or for dressing yourself up like Scream, we have collected five scary places that you can virtually visit through Google Maps.

Nagoro Doll Village
There is something different about the tiny village of Nagoro on the island of Shikoku in Japan. At first, it might look like your ordinary half-deserted town village, but take a closer look around, and you might be in for a surprise. Why? Because Nagoro is full of dolls. Life-sized, and personally speaking, quite creepy looking dolls, sitting around by the roads, in front of houses, and even inside an old school. Most of its residents had left for better employment opportunities elsewhere, leaving the village to a poor fate of a constantly decreasing population. The creator of the dolls had upon returning to Nagoro experienced an immense loneliness, and thus decided to fill the void by creating the dolls. The dolls all resemble a person who used to live in the village but have now passed away, and all are placed in a location where the person might have been spending a lot of their time.

Intrigued? If you don’t have the opportunity to visit the village in person, use Google Maps’ Street View to get a sense of the atmosphere in Nagoro.

Isla de las Muñecas
Haven’t had enough of dolls just yet? No? Good, because we have more in store for you. Just south of Mexico City, you’ll find a small island with the fitting name “Isla de las Muñecas” (Island of the Dolls). Rumors have it that the dolls found on this island are possessed by a little girl whose life ended too soon, and under strange circumstances. Apparently, the caretaker of the island had found the lifeless body of the little girl, drowned, and along with her, a floating doll. He hung the doll to a tree, but had presumably been haunted by the spirit of the girl, driving him to hang more dolls all around the island. To make the story even more scary, the caretaker of the island was found dead 50 years after the death of the girl, drowned, and in the same spot as where he himself had found the girl.

Check out the haunted island and its hundreds of dolls on Google Maps:

Lisakovsk Pentagram
Star or pentagram? No matter how you look at it, the strange symbol scorched into the earth at the outskirts of Kazakhstan doesn’t seem very natural. Various conspiracy theories and rumors online suggest that the symbol is related to religious and even devil worshipping acts, but a historian has later announced that the figure is actually nothing but a system of pathways in a park, shaped like a star.

What is certain, however, is that the symbol in the earth is quite the eyecatcher. What’s your theory?

The (Not So Lost) City of Atlantis?
Users of Google Maps have spotted something rather interesting off the coast of Africa. Something which looks remarkably a lot like buildings is evident under the surface of the water. We all know the myths of the city of Atlantis, lost in the depths of the ocean. Could this be a sign that the city we’ve always called a myth might actually be a real, existing place? The rumors of the lost city found on Google Maps have already been shut down with the explanation that the grid pattern visible on the map is the result of sonar boats collecting mapping data. But is this the real answer, or is someone hiding the truth for us?

See the “city of Atlantis” on Google Maps here and decide for yourself. 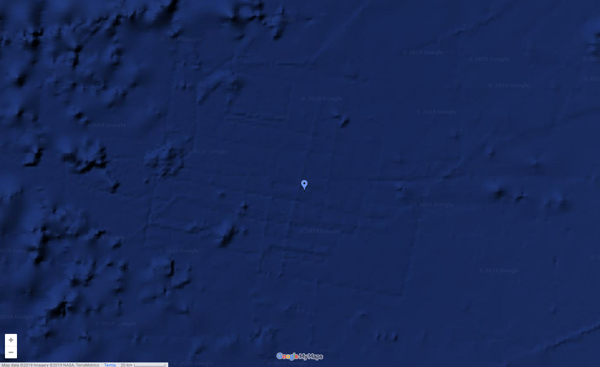 Pripyat Amusement Park
Things don’t have to be a myth to be scary. Sometimes humans cause irreversible mistakes that affect people’s lives forever.

An example of this was the Chernobyl disaster in 1986 and its life-changing aftereffects for the people living in the area. The Pripyat amusement park was just a few days from its opening date when the nuclear accident happened at the Chernobyl Nuclear Power Plant on the 26th of April, 1986. Reportedly, the amusement park had pushed forward its opening date and was open to the people of Pripyat for a few hours on April 27th until the city was evacuated later that same day. Now, not surprisingly, the amusement park has become a deserted area due to the continuous radiation, which is reported to have some of the highest levels in all of Pripyat.

If you don’t exactly fancy the idea of exposing yourself to the unhealthy amount of radiation, you can take a virtual trip to Pripyat and the amusement park through Google Maps, and experience the area that thousands of people had to leave behind.