Missed Google I/O? Here’s Everything You Need to Know part 1

The first ever virtual Google I/O recently took place. In case you missed the event, we have created a two series blog post with the biggest announcements to bring you up to speed.

This year, Google delighted developers with three technical sessions from their engineering and product teams. In this blog post we will give you the technical highlights and a shortcut to the sessions in case you want to watch them. Which one is your favorite?

Psst, if you are more into new Google Maps features, you can jump to part two here.

Last year, Google brought us crispier looking maps when they introduced Vector Maps to the Javascript API using WebGL technology. Over the next few weeks, this will be generally available on Javascript, so everyone can create those crispy-looking maps in 2D and 3D, but there is more.

In the session ‘Next generation Maps for the Web’, Travis McPhail, Engineering Lead for Google Maps Platform, introduced the latest beta features for the Maps JavaScript API: Tilt and Rotation, and WebGL Overlay View.

Until now, your maps have been limited to a two-dimensional, top-down view of the basemap. Thanks to the new tilt and rotation features, your users can now explore the world around them from a whole new perspective as the new features enable 67.5 degrees of tilt and full 360 rotation of the map both on load and at runtime. This means that oblique 3D building models will appear in your web apps for the first time.

During the ‘Next generation Maps for the Web’ session Google Maps also announced the WebGL Overlay View. With WebGL Overlay View it is possible to render two and three dimensional objects directly on the basemap. This means your rendered objects appear on the map, but they will also be rendered as part of the map in three-dimensional space with occlusion and perspective. The picture below shows a WebGL Overlay View implementation of 3D markers. Notice how the markers become hidden from view behind buildings as the map rotates, and get smaller as they move away from the camera.

Last year, Google released the beta version of cloud-based maps styling features which is a set of capabilities to help you customize, manage, and deploy your maps from the Google Cloud console. With the launch of cloud-based maps styling Google Maps introduced a rich, intuitive, UI-based style editor that lets you deeply customize the look and behavior of the map from zoom-level customization to custom styling commercial corridors.

In this blog post, Google highlights MapsPeople customer Hemnet, which is Sweden’s leading property platform. Last year, we suggested Hemnet the Cloud Styling concept and they are already seeing benefits from migrating to Cloud-based map styling. “Recently, our team temporarily re-styled our property maps to delight our customers during a holiday. It was quick and easy to bring this idea to life through Cloud-based map styling. We could iterate and preview different map styles within minutes and go live instantly without having to deploy,” Magnus Burell, Product Manager at Hemnet. 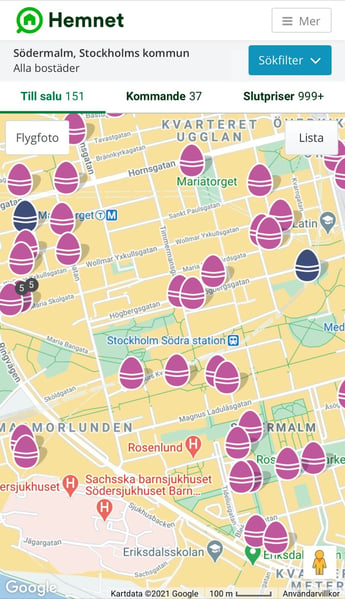 If you want more Google IO highlights, check out this blog where we guide you through the new Google Maps features.