Just like pretty much every other physical event last year, Google decided to cancel its annual developer conference due to concerns around the coronavirus. This also meant that MapsPeople, DigitalLead (previously BrainsBusinesses), and Google Developer Group Aalborg decided to cancel the extended version of the event as well.

It’s now been a year since then, but unfortunately, we’re still in the midst of the pandemic. Due to this, Google recently has announced that there will be no physical Google I/O event in 2021 either. Instead, the conference will be held virtually. 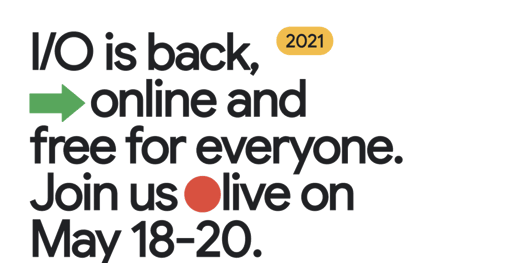 For everyone interested in Google technology, Google is hosting I/O 2021 on May 18 to 20 - online and free for all the Google enthusiasts!

With Google cancelling last year’s Google I/O event, Google I/O Extended Aalborg likewise had to cancel. And while we wish we would’ve been able to host the event again this year, we’ll instead look forward to inviting everyone to a great event when we can all once again meet in the same physical location.

Until then, we fortunately still have Google I/O 2021 to look forward to in May. Online event or not, we are excited to get the latest company and product news from Google. You don’t want to miss this, so make sure to register and claim your (virtual) seat!

Registrations are already open and you can sign up here.

While waiting for Google I/O 2021, take a look at our Google Maps blog to learn something new and get inspired.