Why Is Game Attendance Declining When Fans Are Becoming Super Fans?

The FIFA World Cup is in full swing and fans are trawling the internet for information about players, match highlights, soccer tutorials, and much more. But are they also filling the Russian stadiums? In general, sporting event attendance is declining. Being a sports fan is no longer about the game itself or about being glued to the TV screen. Thanks to online videos, fans are taking fandom to a whole new level and as a sports venue, you need to embrace this new behavior, if you want to stay in the game.

Are You Bleeding Attendees?

With more than two weeks left of the 2018 World Cup, it’s too early to make any conclusions about the average attendance per game. However, if we look at the statistics from 1930 to 2014, Russia would do extremely well to break USA's average attendance record of 68,626 in 1994. By comparison, an average of only 53,592 fans were filling the Brazilian stands in 2014. That’s a 28% decline from ‘94 - and the 2014 World Cup is actually in third place according to the World Cup attendance table.

Soccer is not the only sport that’s bleeding attendees. The financial news and opinion company 24/7 Wall St. reviewed 10-year changes in average home game attendance for professional hockey, baseball, basketball, and football teams across North America. For 17 teams, the average home game attendance has declined by more than 10% over the past decade, and Fortune reports that the Major Baseball League is currently facing the lowest attendance rate in 15 years.

According to McKinsey & Company, many sports executives fear that the reason for the declining ratings and ageing audience is the disengagement of millennials from live sports, but that’s not true. Millennials enjoy sports just as much as the older generations, they just consume it in a different way. Despite a recent McKinsey online survey showing that 45% of Gen Xers are committed sports fans vs. 38% of millennials, there are in fact a higher percentage of millennials following the English Premier League (EPL) and Major League Soccer (MLS). 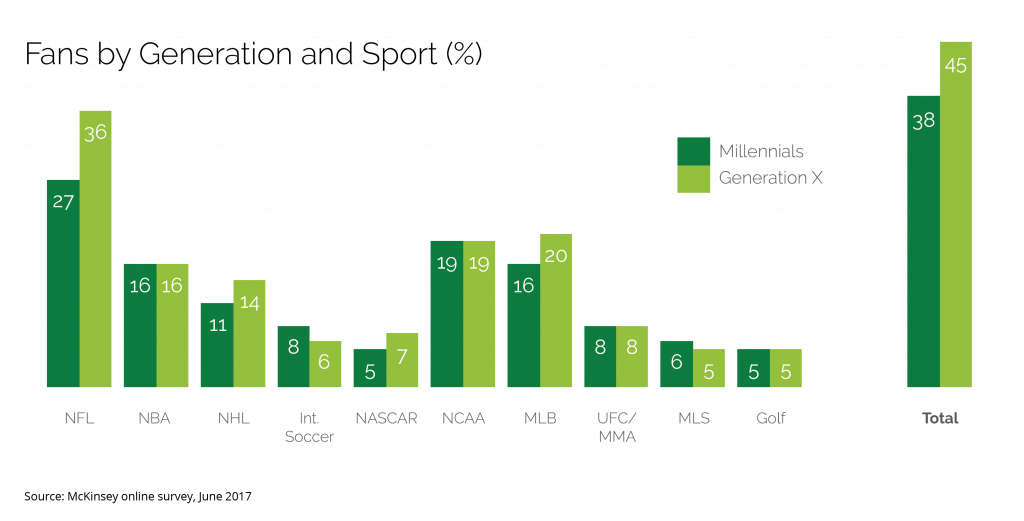 One of the reasons behind the empty spectator seats is the many sports options across numerous screens. Fans of all ages - not just millennials - are watching fewer games and quitting them faster. In addition, online videos are changing the way we consume sports.

Google has identified three ways online videos are changing what it means to be a sports fan:

Fandom goes way beyond watching the game itself

We live in a digital world where the answer to just about any question is only a Google search away. This combined with curious and engaged fans has resulted in a 50% growth in watchtime of “funny” sports videos and a 60% growth in watchtime of sports “interview” videos on Youtube in the past year. Additionally, searches for “how to” videos on Youtube has more than doubled in the same period.

Sport fans increasingly want to get the good stuff

It’s quite a commitment to watch an entire game - especially if you can’t watch it live in your timezone. This has led to a 90% increase in searches for football “highlight” videos and 70 of the top 100 sports video searches on Youtube include “great”, “greatest”, or “best” in the title.

Sports fans want to watch on their own terms

Today, people expect to be able to watch anything, anytime, on any screen. Sometimes, getting the full experience can even mean watching on multiple screens simultaneously. Eighty percent of sports viewers say they use a computer or smartphone while watching live sports on TV. They use the devices to search for player stats, live scores, messaging other fans, and watching related videos. In addition, 30% of sports fans say they stream live sports on their phone or tablet - it would be nice to lure the “live streamers” to your stadium though, right? Let’s take a look at how you can do that.

Excite Fans Before the Match

We recently posted this blog about research-obsessed consumers, but it’s worth mentioning again. The blog, based on a Google study, explains how planning for an event increases the excitement. The research process is even becoming part of the experience itself and it helps build anticipation.

We know that generally, sports fans are an enthusiastic crowd, but we want to get them even more excited. As explained, a lot of fans prefer to watch the games at home flanked by all of their devices, but what if we could make them use the devices before the game to lure them to your stadium?

With an indoor navigation solution, you can potentially do that. By using the application as a build up before game day, you can push attendees exciting notifications or maybe even exclusive short videos with interviews, training, or tutorials with star players. This will benefit both your stadium and the team as fans will feel a closer and more personal relation to the players, and they’ll return this “favor” by supporting them in person on game days.

Fans can also use the wayfinding solution to plan their trip from home. This includes the exact route from their front door to their seat at your stadium, overview of points of interest, and of course turn-by-turn navigation both inside and outside your venue. This helps you avoid bottlenecks, as fans are always guided to the entrance and exit closest to their seat. Equally, if a line to the toilet or a food vendor is too long, visitors can easily find the nearest alternative.

TVs aren’t just TVs anymore. They’re 50-inch home entertainment systems allowing fans to watch the game from every angle in ultra-high-definition. This makes it more difficult to lure fans from their couch to the stadium. Not because they want to save money. They want an experience and they’re willing to pay for it.

A top-notch stadium experience can be quite expensive to create - especially if it involves microbreweries, Michelin-calibre restaurants, or wine cellars for fans’ personal vintage wines. Luckily, there are other, less expensive ways to create a first class experience.

Imagine if fans could order the food they’re craving while watching the game and have it delivered right to their seat. With indoor navigation that may actually be possible. By combining the navigation solution with a food ordering system and an indoor positioning technology, fans can order food without leaving their seat and have it delivered - and staff will never get lost or confused about where to deliver the order, as they’re equipped with indoor navigation too.

Or why not add a live feed to your application that allows fans to watch highlights from different angles or maybe even replay them. The possibility of sending push notifications is also very important at this stage. For instance, fans could get a glimpse of what’s going on in the locker room during half-time. You also want to feed spectators with stats and information on selected players, goal scorers, the referee even. It’s all about creating a personal experience through the technology that 83% of attendees are using during the game anyway: their smartphone.

Technology is advancing every day, which makes almost everything possible. The focus in this context is to combine technology, exclusiveness, and personalisation, and an indoor navigation solution allows you to do just that. So, use your imagination and lure fans back to the stands.